"Be aware. Though their name references the Hillbilly Shakespeare, the Oak Hill Drifters do their own thing. Embracing American roots music, they lend nods to rockabilly and country as well as western swing, jump blues and early rhythm and blues. Led by lead singer Rachel Decker, the band’s albums highlight the group’s penchant for learning from and implementing the past into today’s music." 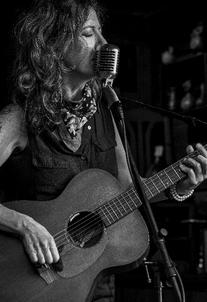 "​Why not lean into that handy time displacement and hit the town to the sounds of rockabilly and western swing?  The Oak Hill Drifters have been plugging away at their take on old-time music since 2014. The last year might have slowed them down a little, as it did all musicians, but it surely didn't stop them."

​The band's current iteration was formed in 2014 that includes Rachel Decker, Craig Roy, George Dimitrov and Tom Pearce whose collective resumes include work with The HoneyBees (Chicago), Nick Curran, Hindu Cowboys and Rocket-88 (Orlando).  ​​Rachel Decker fronts the band with a vocal prowess that has drawn comparisons to the likes of Janis Martin and Patsy Cline.

In 2016, the band released its debut 11 song compilation, "Fly Off The Panhandle."  The band's sophomore recording, "Lied To Me" was released in June 2018.

In 2022, Oak Hill Drifters released a (5) song EP titled "The Iris Sessions" that was produced by Billy Chapin whose accolades include recordings with Edwin McCain, Sister Hazel and Don Henley.  The release received critical acclaim both within the United States and abroad.